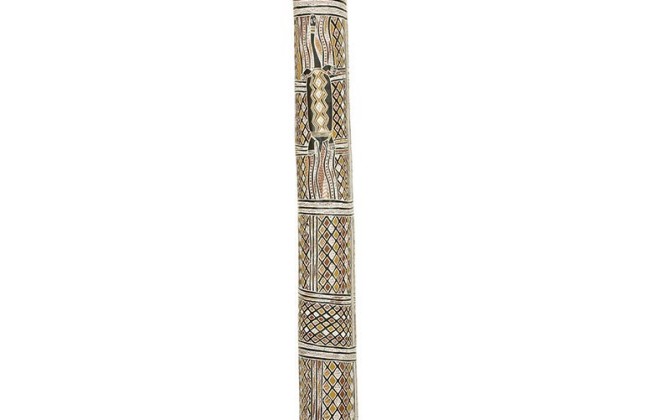 The painting depicts Gulutji, the sacred water hole at Gangan where a fish trap was
constructed by driving stakes into the banks and across the flow of the river and filling
the gaps between with branches and grass. An opening was left in the middle of the
trap where a paper bark basket was fixed. Fish upstream were driven into the trap and
when they tried to jump over it they were caught.
The original trap can be seen today manifest as a natural rock barrage. Horizontal bands
across the painting depict this. The trapped fish are Baypinna or Saratoga. Beyond the
rock formation is the sacred water of Gangan illustrated by diamonds which is the sacred
clan design for the
Dhalwangu of Gulutji.
In traditional Yolnu society the last rites of mortuary that have the soul returned for
rebirth can only be assumed when the bones have been cleansed of any tissue. This is an
honored role for the child, mother or mother’s mother kinship relations of the deceased.
The Baypina are normally cooked in a termite mound ground oven ( Gundirr) with sheets
of paper bark to trap the heat. This is also a metaphor for the initial burial prior to bone
cleansing that a deceased Yolngu person undergoes prior to the placement of the bones
in a Larrakitj hollow log coffin.