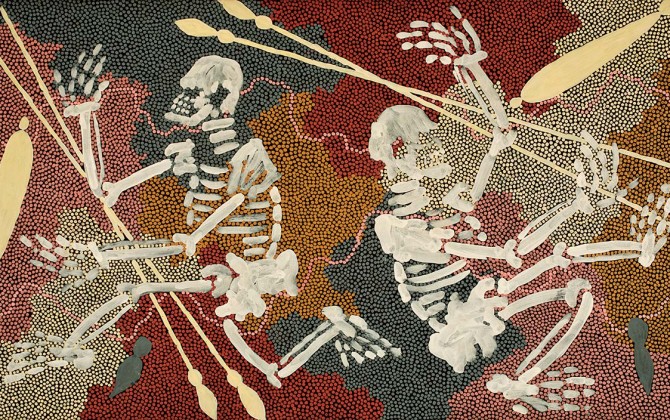 Clifford has interpreted his iconic work of Warlugulong in several ways from his early boards
where it was shown as a fire spreading out surrounded by white dots symbolizing ash to his
monumental piece of 1977 that showed a more expansive view of his lands and the story set in
geographical context. When this piece was auctioned in 2007 at Sotheby’s in Melbourne it set a
record for any piece of Australian Aboriginal art when it realized $2400000.
This work provides a more condensed view of the 1977 work and shows just the event..
Warlugulong is a site south of Yuendemu where the two Tjangala brothers depicted here have
been consumed by a fire storm created by their grandfather, the Old Blue Tongue Lizard Ancestor
Figure (Tjampitjinpa). The Lizard Ancestor was angry that the brothers had killed a sacred
kangaroo which was their totem and therefore taboo.
The brothers saw the approaching fire and ran south with their spears, spear thrower and stone
knives but the Willy Willy (whirlwind) that the Old Man had created was too fast and they were
consumed by the flames. The two pink and wavy horizontal lines that run through the painting
represent the turbulence and speed of the Willy Willy and were only inserted on the Fire
Dreamings that Clifford considered as special.