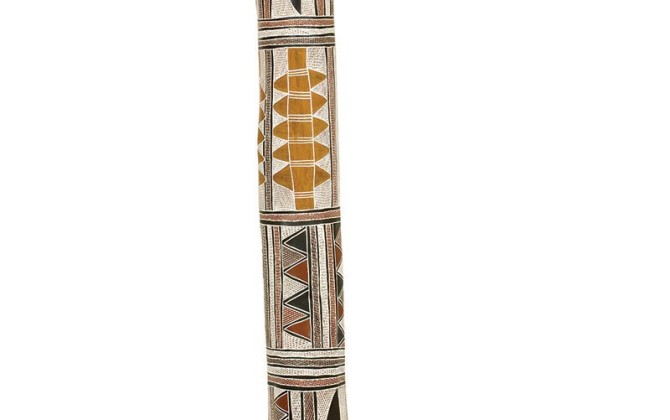 Mapunu is the daughter of a deceased senior Munyuku law man and clan leader and she
has inherited the right to paint the story painted on this pole.
Garapana is the term used in Munyuku ritual that has reference to a rock that sits under
the water off the coast of Yarrinya. This sacred rock is said to be a remnant of the stone
knives used by the spirit men Wurramala in the ritual butchering of the ancestral whale
Mirinyuna. This act violated some of the complex kinship laws associated with Yolnu
custom and to purge themselves of guilt and contamination they hurled these knives,
Garapana, to the depths of the ocean.
The knives hit each other and then became the rock which shares the name Garapana.
The knife shown on the painting is modern and is displayed for easy interpretation of the
story. Superior flint knives were produced in an ancient village at Ngilibitji in Central
Arnhem land and were the type that would have been referred to in this narrative.